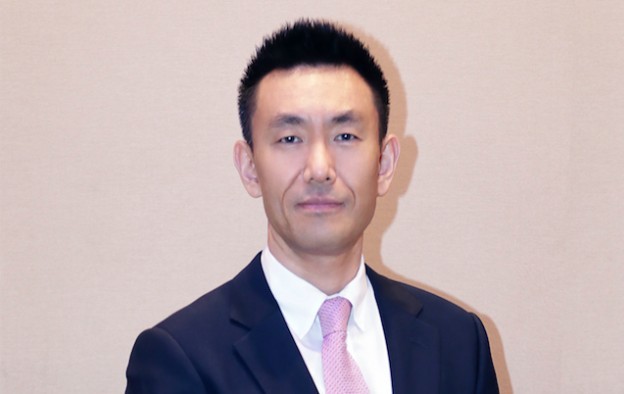 VIP gaming promoters, and in particular the ones based in Macau, will “find a way” to serve high-value customers from outside mainland China, says the boss of the newly-revamped Hann Casino Resort in Clark, in the Philippines.

“I think junket operators in Macau will find a way to spread out in different jurisdictions” serving players other than Chinese, said Daesik Hann (pictured in a file photo), the president and chief executive of Hann Casino Resort’s promoter, Hann Philippines Inc, in an interview with GGRAsia.

The Philippines was “going to be one” of those places, he suggested.

Macau’s casino junket sector has been in the spotlight since the detention in Macau of Alvin Chau Cheok Wa on suspicion of promoting online gambling overseas by Chinese players, and the shutdown of his junket brand Suncity Group, described previously by investment analysts as the largest VIP operator in the city.

Following the closure of all Suncity Group VIP rooms in Macau on December 1, it was reported that a number of the city’s casino concessionaires were to cease collaboration with other junket brands. Wynn Macau Ltd and Melco Resorts Entertainment Ltd confirmed last month that junkets had ceased operations at their respective properties in Macau.

Hann Casino Resort, formerly known as the Widus Hotel and Casino, relaunched on December 15 under the new branding.

Its boss Mr Han told GGRAsia he did not think his venue “would be affected a lot” by the Macau junket situation, as the group’s “revenue from junket operations was… minimal,” even before the travel restrictions linked to the Covid-19 pandemic.

Mr Han affirmed that Hann Casino Resort would also offer online gambling. “All these casino licences from Pagcor have pretty much the same terms and conditions,” said the CEO, referring to the country’s casino regulator, the Philippine Amusement and Gaming Corp.

Such a licence permits “video streaming,” said Mr Han. So regarding “proxy betting… as long as you have a [casino] licence from Pagcor, that’s included,” he added.

Even permission for online gambling services serving domestic customers is “included,” said Mr Han. It is a “matter of how and when we are going to develop” online services, said the executive.

GGRAsia asked Mr Han whether Hann Casino Resort would take a defensive stance in offering online gaming, in case customers from mainland China were minded to use such services.

With effect from March 1, it has been illegal in China for anyone to organise or facilitate Chinese consumers to gamble overseas.

Mr Han stated: “As long as Pagcor accepts video streaming, there’s no reason to stop, and not enter that kind of sector.”

VIP gaming promoters, and in particular the ones based in Macau, will “find a way” to serve high-value customers from... more 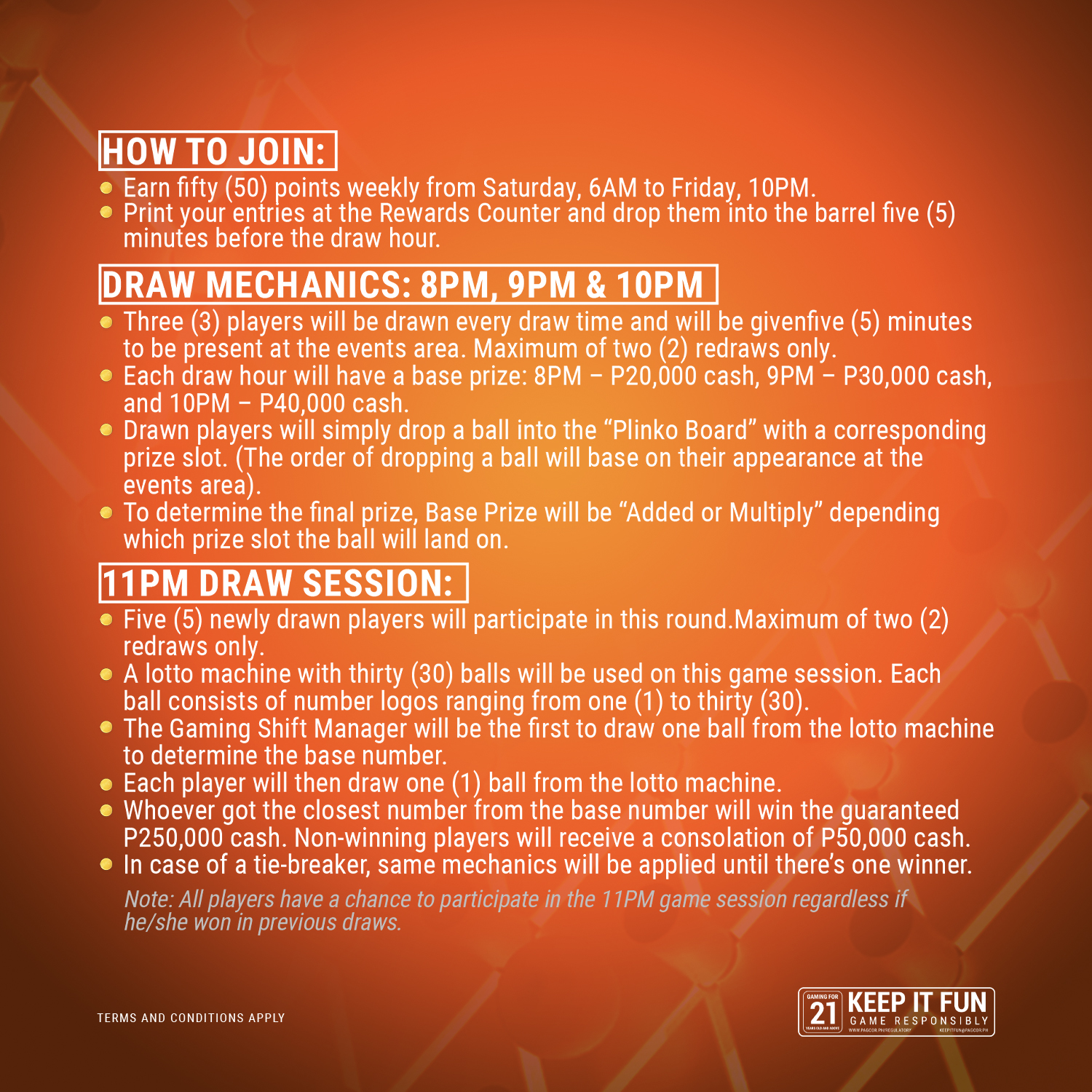 Let the lucky ball bring you up to P250,000 Cash every Friday of February in our Lucky Cash Plinko Promo!
Earn 50 points weekly to get one entry from Saturday 6AM to Friday, 10PM 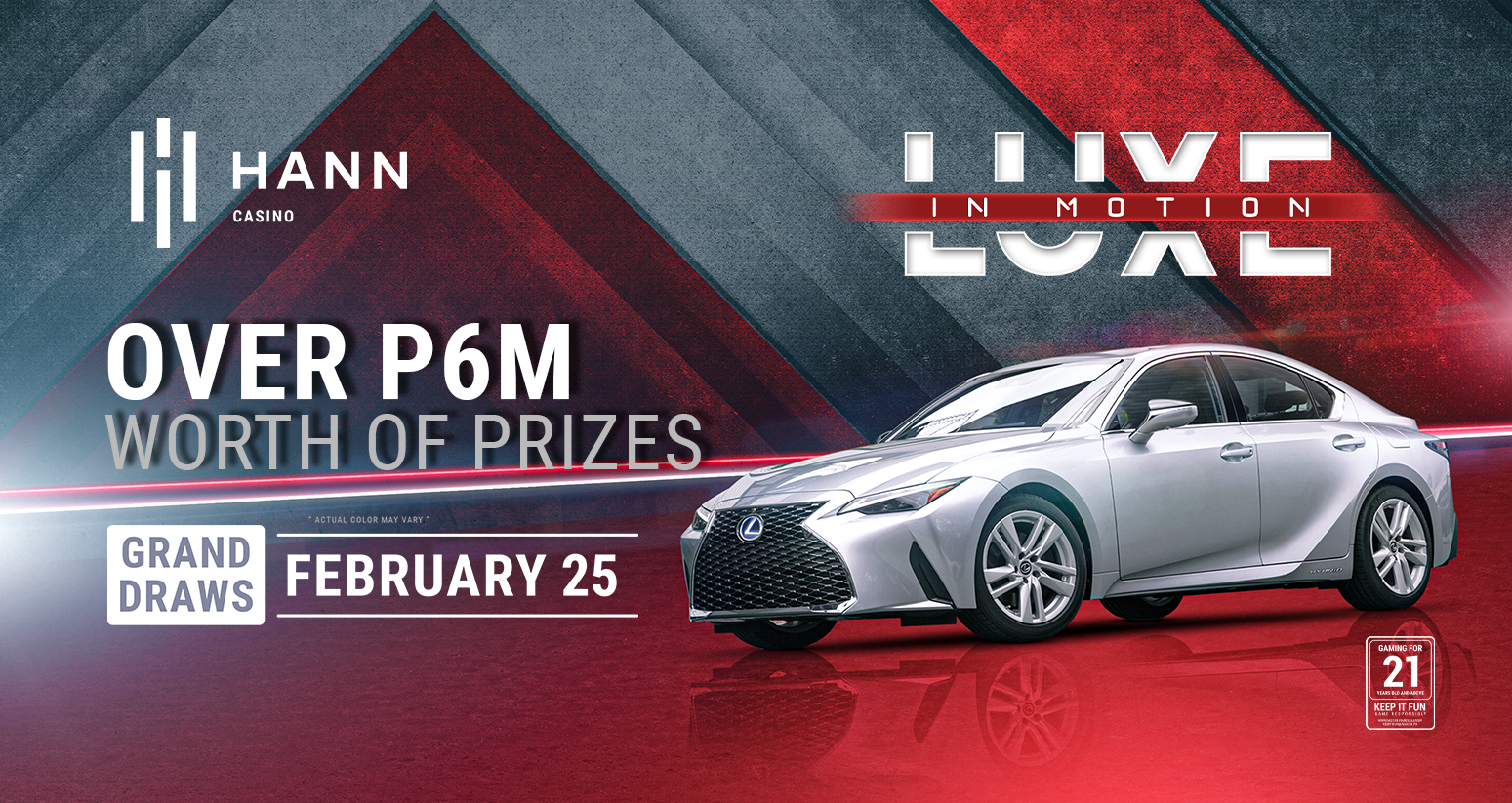 Get hold of a BRAND NEW 2023 LEXUS IS 300H plus exciting Cash Prizes in our Luxe in Motion Grand Draw this February 25. Every 50 points you earn during the points-earning period entitles you to one (1) raffle entry until February 25, 10PM. 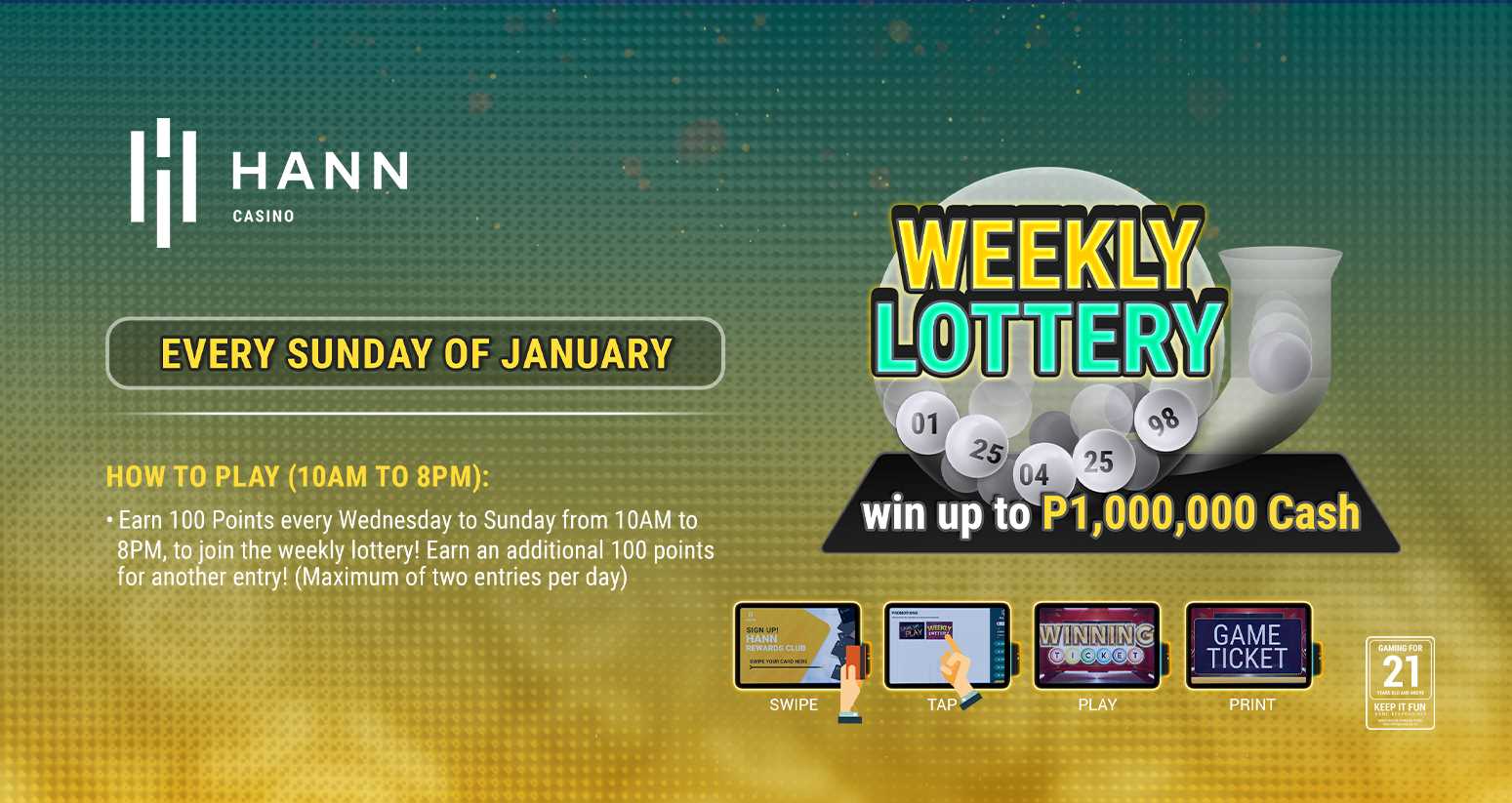 The Weekly Lottery is back every SUNDAY! Join us in our – “Weekly Lottery” Promo and pick your 5 Lucky Numbers for a chance to win up to P1,000,000 Cash.

Earn 100 points for 1 entry Weekly from Wednesday to Sundaay from 10AM to 8PM or 200 points for a maximum of 2 entries. Swipe your membership card at any Kiosk from 10AM-8PM and tap on the “Weekly Lottery” game icon to participate. Drawing of winning numbers is every Sunday , 9PM.